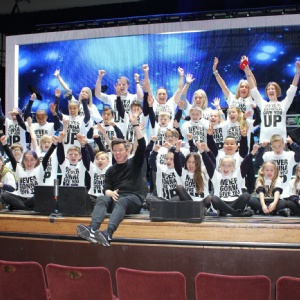 Children from Netherfield Primary School met 80s singer Rick Astley on Tuesday after launching a Twitter campaign asking him to join them in school.

The Class 8 pupils travelled to meet 80s heartthrob Rick at Nottingham’s Royal Concert Hall - ahead of his gig there on Tuesday - where they were lucky enough to get a tour behind the scenes and gather some autographs.

The lucky children  also had the once in a lifetime chance to sing with Rick, their class song for 2018 – and his very own chart topper ‘Never Gonna Give you Up’.

Teacher James Payne explained how the visit came about: “We were looking for a new class song to sing in assemblies and my class chose Rick’s song because it fit in nicely with our positive mind-set learning and they really enjoyed singing it.

“We realised afterwards that Rick happened to be in Nottingham on the day of our assembly and thought it would be great if he could pop along so we started a campaign asking him to meet us.”

The entire class wrote letters to Rick, emailed his website and were even on the radio in their bid to get the 80s star to sing along with them.

See coverage of their trip http://www.bbc.co.uk/news/uk-england-nottinghamshire-46194096

More photos from the visit are in the photo gallery.