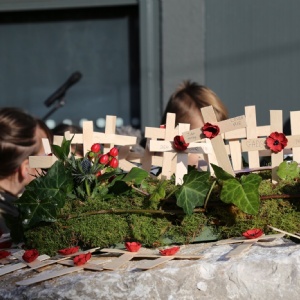 Children from Netherfield Primary School joined civic dignitaries for the official unveiling of a new remembrance memorial in Netherfield.

Netherfield Primary School pupils took turns reading at the ceremony, which saw Gedling Borough Council Mayor Coun Sandra Barnes cut the ribbon to unveil a specially commissioned plaque and memorial to honour those local soldiers who lost their lives in World War One.

Gedling MP Vernon Coaker was among the guests who watched on as the schoolchildren then placed commemorative crosses on the memorial.

The new plaque and memorial, donated by Gedling Borough Council, is the result of efforts by the Netherfield community over the past year, working together to create a permanent war memorial to honour fallen soldiers from the town.