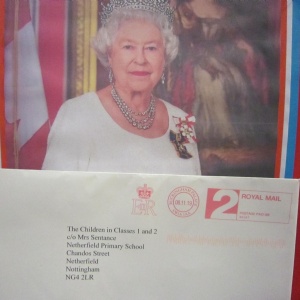 Children from Netherfield Primary School put pen to paper to send messages to the Queen – and have now received a Royal reply!

Inspired by the book The Queen’s Knickers by Nicholas Allan, the Year 1 pupils described their own pairs of pants and posted their letters off to Buckingham Palace.

And they were delighted to receive a letter back – from The Queen’s Lady in waiting – saying how delighted Her Majesty was with their work.

It read: “The Queen wishes me to write and thank you for your letters, from which Her Majesty was interested to learn about the story you have been reading. Although The Queen is unable to reply personally to the hundreds of letters she receives every day, Her Majesty was glad to hear from you.”

The letter is now in pride of place in the Netherfield school hall, along with the children’s work – a reminder of their very own Royal seal of approval.

See photos of the display in our photo gallery.